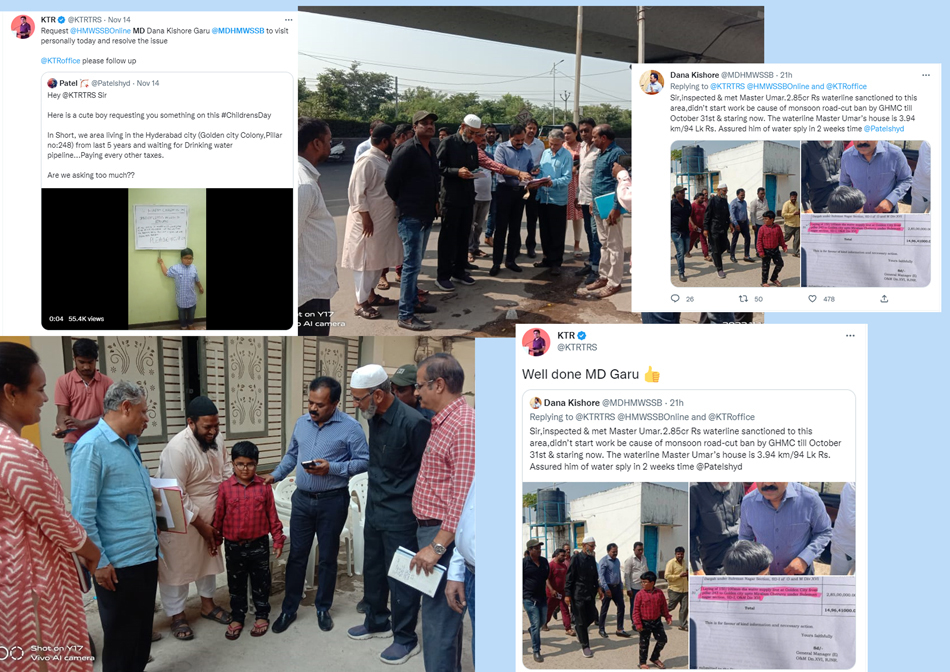 Responding to the tweet by a netizen's video of a boy "Umar" resident of Rajendranagar Golden City Colony, Pillar No. 248 by display of placard on the occasion of Children's Day appealing to Sri K.T. Rama Rao, Hon'ble Minister for MA&UD regarding water supply problems in their area and requested to resolve their problem.

Sri M. Dana Kishore,IAS, Managing Director, HMWSSB on the advice of the Minister immediately visited the Golden City Colony and met the boy "Umar" and colony members in the area and inquired about the problem. Meanwhile, the HMWSSB has already sanctioned Rs.2.85 crore for laying of water supply pipeline to this colony. However, as part of monsoon precautions, the GHMC has banned cutting of roads till October 31. Due to this, the construction of the pipeline has been delayed. The MD explained the issue to the residents of Golden City and assured them to complete the pipeline work in the next two weeks and till then, the HMWSSB will supply drinking water to the colony through water tankers.

By the immediate action of the MD, HMWSSB, Minister Sri K.T. Rama Rao  congratulated Sri M. Dana Kishore, by tweeting him on twitter for his early action to meet the boy and colony residents in Golden City Colony and assured them to solve the problem.