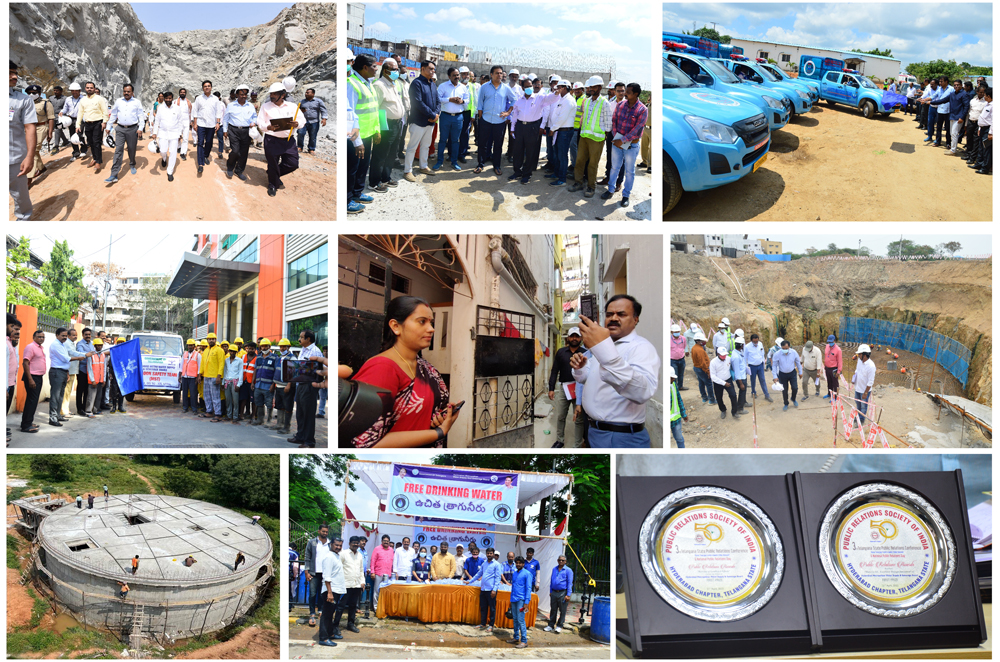 Under the administration of the Chief Minister of the Telangana State Sri K. Chandrashekar Rao, with the guidance of Municipal Minister Sri K.T. Rama Rao and the leadership of Managing Director Sri M. Dana Kishore, the HMWSSB is receiving the appreciation all over for efficiently managing the supply of drinking water and sewage treatment in the city. Expanding its scope to provide better services to the people, it has expanded its services by providing drinking water to the villages inside the outer ring road along with GHMC and taking on the responsibility of sewerage management in the suburbs of the city. The state government has entrusted the HMWSSB with the responsibility of designing for the construction of underground drainage and flood water canal systems in the vicinity of the Yadadri Lakshmi Narasimhaswamy Temple, Yadagirigutta Municipality. This responsibility has been efficiently managed and completed by the Water Board.

HMWSSB provides transparent services to the customers by providing advanced technology from time to time. More robust plans have been drawn up to further strengthen the water supply and sewage treatment system in accordance with the growing population. From the stage where there was not enough drinking water in the summer, today the HMWSSB has reached the stage of Drinking Water Supply all over the year in the city as well as the suburban villages.

1. Projects like Sunkishala for the supply of drinking water to the city even if there is drought for 5 consecutive years.

3. Providing septic tank cleaning services to customers at low cost. This is the progress achieved by the water body in the last eight years.   Along with the current achievements, the future goals are set and   moving towards achieving them.

The state government has undertaken the Sunkishala project in a prestigious manner to ensure that the city of Hyderabad never face the water scarcity. Already Krishna and Godavari drinking water supply is being provided to the people of the city through Jalamandali in various phases. The government is taking steps to prevent any problems in the future by making plans in advance. Keshavapur Reservoir at Kondapochamma Sagar for Godavari water and Sunkishala for Krishna water is being undertaken.

On May 14, 2022, State Municipal Minister KTR also laid the foundation stone for Sunkishala Intake Well Project near Nagarjunasagar. The work is under progress rapidly with the aim of completing the entire project by June 2023.

The Jalmandali is already treating the sewage that is generated daily in the city. Another step has been taken to expand it further. 31 new sewage treatment plants (STPs) are being constructed at a cost of Rs.3,866.41 crore with the aim of 100 percent sewerage treatment in the city.

Jalamandali, which has already completed phase-1 of ORR at a cost of around Rs.700 crores, has now started phase-2 works. ORR-2 project has been undertaken to provide drinking water to Gram Panchayats, Municipalities, Municipal Corporations, Housing Layouts and Gated Communities under ORR with a cost of Rs.1200 crores. The project has been designed with new reservoirs of 137 million liters capacity, in lets, out lets, new pipeline system of 2,863 kms providing water connections to BPL families and constructing chlorination rooms. Plans are written to meet current needs as well as future needs. It is estimated that the population in these areas will increase to 33.92 lakh by 2036 and this project has been designed to provide sufficient water to the growing population. If this entire project is completed, 2 lakh new families will get drinking water connections under the ORR. Minister KTR laid the foundation stone for these works on January 24, 2022. This project is being carried out in two packages.

Safety of workers is important

Jalamandali has taken appropriate protective measures for its workers in the context of the government's directives to ensure that safety standards are strictly followed at workplaces and to ensure that no untoward incidents take place. Conducted safety vigils in all divisions to create awareness on precautions to be taken while performing duties. In this, the workers and staff were made aware of the implementation of SPO (Standard Operating Procedure) guidelines in sanitation work, the performance of safety equipment, how to use them, precautions to be taken while cleaning man holes and first aid in case of any accident in the course of duty.

SPT Teams for Monitoring of all HMWSSB Works

A new system has been introduced in HMWSSB for further monitoring of safety standards at workplaces. Teams were formed under the name of Safety Protocol Team with the slogan "Work Site Safety is Public Safety". Six teams were formed for six watershed circles. Each team consists of one engineer, one constable, one home guard cum driver. A Chief Vigilance Officer is in charge of all these teams. They constantly monitor the safety measures at the various work sites undertaken by the Jalamandali in the city. Pipeline expansion, sewerage works, leakage prevention works, manhole repairs, etc. ensure strict adherence to safety measures at every work site. If there is no protective equipment or barricades in any work place, these teams will set them up. Proper lighting, installation of radium indicators and compliance of safety measures in night work areas are monitored. This new system has been brought in with the idea to prevent any accidents in the work places. 6 vehicles have been specially allocated for them. These were inaugurated by Minister KTR on September 24, 2022 at the NCC campus by waving the flag.

Jalamandali has been taken up important steps towards digital transformation for future developments. The IT cell has been strengthened and more mobile apps are being made available for reaching out to the users, quick resolution of problems, billing and other services. Jalamandali proposed to launch a new app for social audit on time management and quality of water supply. Details like water supply time and water quality will be collected through this app from about 6 thousand people for each water supply cycle. Through this, water supply will be improved. At present, the employees are being given comprehensive training on the apps and online media used by Jalamandali.

Drinking water has been made available for 24 hours at all festival seasons including the water supply arranged to the devotees on the Ganesh Immersion days. Jalamandali Quality Assurance Teams (QATs) occasionally test the quality of fresh water in the water camps and take appropriate precautions to ensure that chlorine levels are adequate.

Jalamandali organized a special program called Monsoon Safety Walk to prevent any accidents to the public during monsoons. A team headed by the manager of each O&M section toured the entire area and identified damaged manholes and installed safety grills, barricades, warning boards, indicator boards and red flags are installed in the areas where the flood water is standing.

A total of 16 Monsoon Safety Teams have been formed with five members in each team to be continuously available throughout the city during the rainy season. Special vehicles are available for them 24 hours a day. These vehicles have a dewater motor with a generator to immediately go and remove the water if there is standing water anywhere.

Twin reservoirs with full of Water

Heavy rains in the city this year have resulted in flooding of the twin reservoirs Himayatsagar and Osman Sagar (Gandipet). They have reached full water levels. Due to this, the gates of these were lifted many a times and the flood water was released downstream.

This year, Jalamandali has reaped a harvest of awards. In addition to the Excellence Award in the second National Water and Sanitation Summit organized by the Union Water Ministry last year, it also won the second prize at the national level in the Best Communication Campaign (External) category organized by the Public Relations Society of India (PRSI). It is remarkable that two of them are coming at the national level.

Jalamandali won two awards in the civic relations category. Public Relations Society of India (PRSI) Hyderabad Chapter organized 3rd Telangana State Public Relations Conference along with Golden Jubilee celebrations to mark 50 years. Jalamandali has got awards for coffee table book titled 'Water for All.. Excellence through Innovation' and for a video production called 'Jalageetham' to explain the value of water and to adopt the reuse, recycle and reduce the wastage of water.

In the competitions conducted by the Public Relations Society of India (PRSI) in various categories, Jalmandali won the first and third prizes in the best communication campaign and public awareness categories. The awards were presented by Kailash Vishwas Sarang, Minister of Medical Education, at the PRSI National Summit held on December 25, 2022 in Bhopal, Madhya Pradesh.

Visit of Delhi Jal Board officials

A team of Delhi Jal Board officials visited on August 29, 2022 to study the billing system, technology utilization and revenue aspects adopted by the water board. The team visited Madapur and Prashasan Nagar areas and inspected the performance of meters and other aspects.

Board Vice Chairman Saurabh Bhardwaj also visited on 24th December 2022. He came to study the reforms being undertaken in the revenue and IT departments of Jalamandali. The MD has explained the topics through a power point presentation at the Board office.

HMWSSB won two national level awards  First and Third prizes from Public Relations Society of India (PRSI) for the Best Communication Campaign and Public Awareness done by HMWSSB in the year 2022. The awards presented by Sro Kailash Vishwas Sarang, Minister of Medical Education of Madhya Pradesh, at the 44th National Summit of PRSI held in Bhopal from 25 to 27 this month.

The PR team K. Manohara Chary, OSD(PRO) and K. Subash, PRO handed over the awards to Sri M. Dana Kishore, MD at Board office on 29-12-2022. The MD has expressed his happiness and appreciated the PR team on the occasion.